Measles - Why You Should Immunize

Measles is caused by infection with the measles virus. The virus is easily spread from person to person and causes fever, rash, headache and symptoms resembling the common cold (runny nose, cough, and itchy red eyes). The infection has become relatively rare in recent decades because of the introduction and widespread use of the measles vaccine (MMR or measles, mumps, rubella vaccine). Two doses of measles vaccine is 97% effective against the disease.

People at risk for measles include those who are not immunized or had incomplete response to immunization, those with depressed immune systems, the very young or very old, pregnant women, and people who are malnourished. Because measles is so uncommon in the United States, even one case is reported to health authorities and is considered an outbreak. The recent outbreak in 2014-2015 has been linked to exposure of multiple individuals at an amusement park. Nearly all of those infected had not had the measles shot.

The period from exposure to development of symptoms is known as the “incubation period”. For measles infection, this period averages 6-10 days.

The symptoms of measles include:

A red, splotchy rash that spreads from the face to the rest of the body but spares the palms and soles. 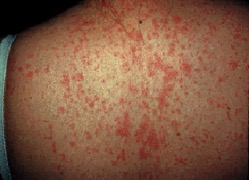 Many viruses cause similar appearing rashes. A rash that turns brown as it fades is characteristic of measles infection.

Most people begin to feel better 4-5 days after the development of the rash.

Measles is spread by contact with infected people. A person can spread measles up to 4-5 days before they are sick. Measles is highly contagious and you can catch the virus just by being in the same place after an infected individual.

Measles is usually a self-limited disease in that it goes away on its own after a variable period. Death from measles is rare in the United States. However, complications can be severe and include inflammation of the brain or spinal cord, the heart, and the lungs. Most deaths from measles are caused by lung infection.

The good news is that measles can be prevented by vaccination. All children should receive their first measles vaccine at age 12-15 months and a booster shot at 4-6 years before starting school.

Others who should consider measles vaccination:

Health Care workers, especially those working with babies or the elderly, or those with compromised immune systems (chemotherapy, HIV etc)

Those immunized prior to 1968 because the vaccine was less effective

An anti-body test, known as a measles titer, can test for prior immunity. HIV patients and others with compromised immune systems should have this test prior to vaccination.

Some people should not get MMR vaccine or should wait for a test to determine immunity.

If you are interested in receiving an MMR vaccine, or if you are not sure if you have ever received an MMR vaccine and would like to know if you have immunity to the measles, please call QuickCare of Brevard to set up an appointment to see one of our providers for vaccine administration or immunity titers.  The clinic can be reached at 321-312-4804.

Here we will share news and relative information with you, through our company blog.

BPA is a physician owned and operated community based group of more than 150 physicians and advanced level practitioners formed in October, 2013.